After entertaining the world for two decades with his legendary skills, on Saturday, the 4th of July 2020, Lin Dan announced his retirement on Chinese social media app, Weibo. At 37 years of age, Lin Dan feels that his physical abilities and past injuries have finally caught up with him and do not allow him the freedom to fight alongside his teammates. In his post announcing his retirement, Lin Dan said that saying goodbye to professional badminton was extremely difficult but that the timing felt right.

While picking out the highlights of his 20-year career is an impossible task, with the constant barrage of “wow” moments he gave us, here’s how we, at Volant Wear, choose to remember the Super Dan.

As the Master of Persistent Effort

Often what distinguishes a successful person from a non-successful one is persistent effort. As Carl Jung aptly put it, “I am not what happened to me, I am what I choose to become”. Lin Dan chose to be the player he has evolved into. It took him 12 years to win his first Malaysian Open, but what got him out of bed every day was the constant sporting spirit of pursuing his dreams and not resting until he had achieved them.

And even after the 2016 Rio Olympic Games, when some people were saying that he was ‘finished’, he continued to give us the privilege to watch his mastery for 4 more years.

Even something as insignificant as a tattoo displays his love for the game. One of his tattoos reads “Until the end of the world”- in a short film made for Intel, he explains the significance of the words to him; it is plain to see how much he loves the sport and the degree to which it has shaped his life. Here’s a clip of the interview mentioned.

There’s a reason why Lin Dan is considered to be one of the greatest badminton players of all time. And even though he mostly attributed it to luck, he recognized the persistence and effort that allowed him to win every major professional badminton title in the world.

As the Supreme Artist of His Time

Watching Lin Dan play is like watching an artist paint. While the speed of both are at opposite ends of the spectrum, the passion that Lin Dan brought to every match that he played was the stuff legends are made of. Every move of his, while deceptively fast, was designed in his mind to get him that win. He has repeatedly admitted that when he walked on to the court, losing was never an option for him. I have been lucky to witness his skills at close hand, having played at a lot of the same tournaments as Lin Dan. As a professional badminton player, the level of skill and strength he displayed was unrivalled. With every match that you watched him play, you could see the tactical thought he put into his strokes. His mental strength is what caused him to prevail, even in later years, against faster and upcoming talented players such as Chen Long, Anthony Ginting and Chou Tien Chen. I remember standing a few metres away from him and feeling the aura of confidence and class emanating from him at international events on numerous occasions. One time that sticks in my mind is the 2007 World Championships in Kuala Lumpur where he claimed the world title against Sony Dwi Kuncoro.

Henry often says that as a spectator, when you watched him play, you could be assured of moments that would make you gasp in delight, moments where you would forget that the man you were watching is mortal, made of the same flesh and blood as all other living humans.

One has to concede that Lin Dan’s inherent ability to step up at key moments and get the job done is perhaps what will make his legacy last long after he fades from the spotlight. If the phrase “Poetry in Motion” had to be given to someone in badminton, Lin Dan would be your man!

A Master of Deception

We’re talking about someone who started off as a typical badminton player from China - fast, strong, powerful, constantly attacking and almost mechanical and machine-like. His early play almost always consisted of rapid movement and jumping high unleash brute attacking force. How he managed to change his game and turn it into his own is worthy of a Harvard Case Study of its own! Many Chinese players remain textbook robotic throughout their professional careers. Not Lin Dan! At the top of his game, he cultivated an innate ability to read his opponent, change the pace of the game and develop a series of shots that were destined to continue his winning streak. No one in the world has the same footwork or technique as Lin Dan.

Perhaps the most famous amongst his shots was his forehand smash cross court. This proved to be one of the strongest weapons in his arsenal, that even when opponents could anticipate it coming, it would be still extremely hard to retrieve. He was able to take shots early on his forehand side at the net too, playing one of three shots: a rapidly-spinning and tight net shot, a fast cross court net which dives away from his opponent or a cross court push which always landed within just centimetres of the line.

Another great tactic he used to great advantage was his around-the-head smash from the high backhand corner of the court. He was extremely accurate with this shot, allowing him to play any shot in disguise, especially the straight slice dropshot/half-smash, reverse cross court dropshot or full smashes to either side - his forearm strength and technique always allowing him to make split second decisions in changing direction.

His 2008 Olympic final against Lee Chong Wei was a masterclass in skill and deceptive strategic judgements and was a satisfying finish for Lin Dan, who beat his arch rival in straight, very comfortable sets.

Here’s a video with highlights from that match.

As an Unabashed Winner

When Henry and I were discussing Lin Dan’s career after his retirement announcement, we both agreed on the fact that even when he entered the professional Badminton circuit, he exuded a rare confidence that you could almost mistake as conceit. As his skill drew traction and he gained triumph after triumph, no one celebrated a win like Lin Dan. In fact, if you look at the video that the BWF shared on Facebook as a farewell video (originally created and released by BadmintonWorld.tv on YouTube), it would be hard to ignore the way he would unabashedly revel in his victory over his opponents.

Here’s the video we are talking about.

Many would pass off his way of celebrating as being arrogant or unprofessional. However, being a former athlete myself, I know how it feels to be out there in the thick of it, the pressure on you to win and the adrenalin coursing through you in that moment. You must admit that he was never afraid to express his emotions, whether that would be roaring at his victories or even shedding a few tears at defeat. You could see that the game meant so much more to him than the opinions of the millions watching him. He was super-human in his skills but very much a human in his reaction to winning.

The Original Bad Boy of Badminton?

The raw sentiment that Lin Dan often put on display earned him the image of being the Enfant terrible of Badminton. In a sport that is often known to be graceful, yet mercilessly swift, Lin Dan would often show multiple expressions of frustration and anger, going so far as to throw his racquet at an opponent’s coach and a few months later punching his own coach as a sign of his dissent and scorn.

If you have followed his career, you won’t be wrong in thinking that he almost enjoyed this bad boy status- never in the history of Chinese badminton would you see so much media attention over a player getting tattoos or launching his own collection of men’s underwear. He cussed out loud on court, wore his own face on a shirt while training, but however scandalising his next move was, he constantly held on to his superstar tag with his characteristic swagger and aplomb.

His fierce rivalry with Lee Chong Wei is still subject to heated discussions, despite the latter having retired last year after his diagnosis of nose cancer. Lee Chong Wei has won 12 matches against Lin Dan, who stands at 28 wins against the Malaysian player. Comparisons are often made between the fierce Lin and the softer spoken, gentle Lee but it doesn’t take away from the fact that both are exceptional players who have each contributed to the sport in their own styles.

Take a look at this video which was shot by Anthony Stanley at the London Olympics Men's Singles Badminton Finals between Lin and Lee. 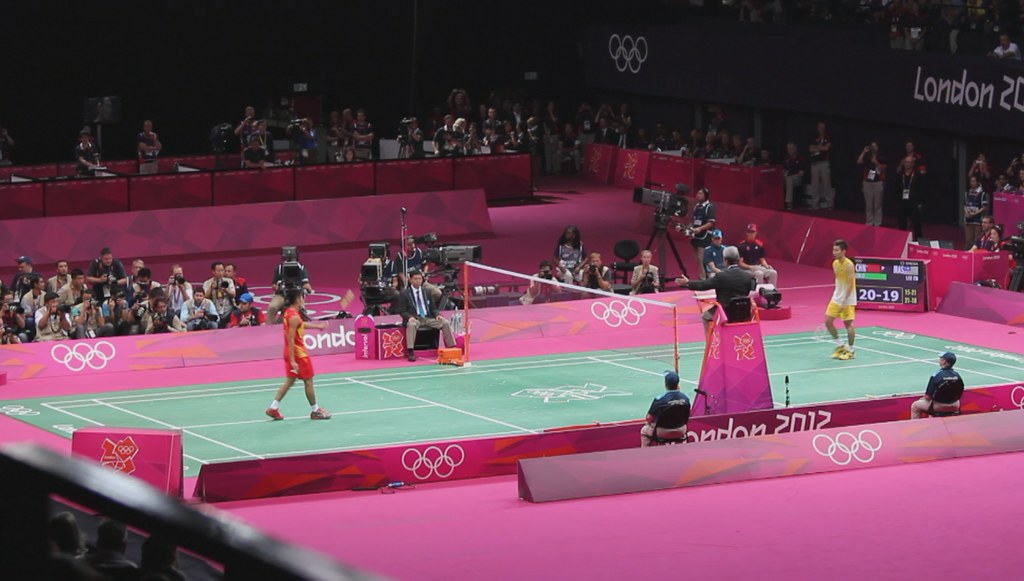 Lin Dan is so much more than what can be put into words. We have always maintained that watching badminton matches on TV or online media will never accurately define what a power packed sport Badminton actually is. When Lin Dan announced his retirement on Saturday, it was a bittersweet moment for the Badminton community as a whole. A legend has hung up his racket for the last time and while the world has paused to pay tribute to him, it is widely accepted that there will never be another Lin Dan to complete the Four Kings of Badminton.

Lin Dan is the indisputable King of Badminton. No others come even near to him.