Jeff and I have this acquaintance.  Let's call him Bob. And damn he’s a good badminton player!

We're talking good as in; he was born to be an athlete and badminton player. Bob would come onto the court and steam roll people without training. It always looked so easy for him and it never looked like he even needed to work up a sweat.

But in most tournaments, he would pass the first couple of rounds and then lose relatively closely to another competitor. The competitor was usually someone who was seeded and Bob would be very competitive against them, often losing in very close sets.

And this is where it gets interesting - the flurry of murmurs in the badminton community would always be along the lines of: 'If Bob actually trained, he would be so good!" We see this over and over again.

There are three things we need to consider in this discussion about talent vs hard work: Please take into account that the answers to these questions that we provide are our opinions only and we'd more than happy to hear what you think.

Can a player's pure will and drive triumph over Bob's natural ability?

This question really depends on the overall level of both players. And because of this, we have to answer the question with a: MAYBE.

If the player is of a comparable level to Bob, then yes, the pure will and hard work can triumph - especially if the match is long in duration. But on the other hand, putting players like Bob to face up against others of a similar level can also result in victory for the more talented player (like Bob) - more likely to be in straight sets.

Conversely, and quite obviously, if the overall level of the players is vastly different, the player who is at a higher level is very likely to be the one who is triumphant.

A general rule of thumb would be: talent gives a player a head start in badminton, but if they wish to not finish the race, then of course hard work will prevail.

Would Bob ever put the effort in to train properly? Does he have the willpower?

This is the million dollar question and where it comes down to our personal opinions. But before diving into the answer, we need to take a step back and see what "created" the talent in the first place.

Talent, to us, can originate from several sources. So we've categorised them into different types:

*** Something interesting to notice is that talent often arises in the early years of life. We're not saying that it can't develop later though - this is just our generalised perception of it ***

Coming back to the question of whether a player like Bob would be able to put the hard work in: this really depends on the person and the type of talent that the person has developed.

We have seen talented players work hard and become the best in the world. As a generalisation, and based on the numbering system above, we'd see these traits in talent types: 1, 2 and 3.

On the other hand, we have seen talented players stay at the same level they're at because their lack of drive, motivation or willpower is the limiting factor in their improvement. We think that we'd see these being players who have talent types 4 and 5, keeping in mind that it may also originate from types 1 and 2 also.

And this may be summed up by the well-known quote: "hard work beats talent when talent doesn’t work hard." And so we move to our final question:

Would Bob improve dramatically, be as good as everyone thinks he would be and succeed, if he put in the hard work at training?

The short answer is: YES.

But it does rely on some qualifying factors:

While talent is often a prized possession, it is not the fuel for fire that some claim it to be, and in fact, can be more of a burden if left un-nurtured. Most raw talent without its appropriate cultivation can lead to a lack of motivation and the player (like Bob) may start taking his/her abilities for granted.

We are not disregarding or undermining the importance of either attributes though. We do believe that both are required to achieve the highest form of success. But in the same light, we have found that some of the biggest drivers for success is hardship or loss.

There are so many success stories of players, athletes and business people who have been told that they can't do, be or achieve something. But rather than give up, it's used as inspiration to prove the doubters wrong. Humans can perceive adversity as something which is more powerful than just being praised all the time. Similarly, losing in badminton can become a significant driver for success.

In essence, it is not whether talent is better than hard work. It's how one can nurture a player to really tap into his/her motivations in order to drive success. And talent is the cherry on top, which can only take you so far if it's not complimented with effort & working hard - as demonstrated below: Do you have a different perspective? Please comment below and let’s chat!

A collaborative piece by Josef Sutrisna & Jeffrey Tho. 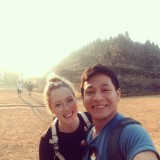 Josef is an active competitive player in the New Zealand league. Amongst many other things, he loves badminton because of the physical fitness and split-second intelligence that the sport requires.